Get Up Close with LOTTO MAX!

LOTTO MAX UP CLOSE is giving away tickets to live shows at Budweiser Stage all summer long!

Visit LOTTOMAXUPCLOSE.ca to find out how you can win one of two ways.

Prizes to be won:

A chance to win a pair of stellar seats

A chance to win a VIP Box experience

The largest lottery jackpot in Alberta history was won by the couple Brett McCoy and Robin Walker. It was on September 2017 when Brett McCoy won the $60 million dollar which he shared half with his girlfriend, Robin Walker.

Lonnie Roth, Walker’s ex-husband demanded half of the $30 million that she received and he wanted it transferred into a secure trust. It was decided not to grant Roth a preservation order by Justice D.A. Sulyma because there was no evidence that the assets were being moved offshore or that court process was being defied. “I conclude that Mr. Roth has not made out his case for a preservation order or advance costs. I dismiss the application with costs.”

Roth also demanded Walker to pay for $200,000 in legal fees which the judge exempted Walker from.

Roth and Walker had nine years of marriage before they separated in October 2009 and were still legally married at the time of the lottery win, according to court documents. Statement of Claim for Divorce and Division of Property was issued by Walker in November 2009. High conflict litigation occurred until April 2012 based on Court documents.

Judge ruled the couple could keep their winnings.

Recently, Lotto Max has been discussing reducing lotto max fees by $20 for every $100 tickets purchased while MaxMillions is running.

A petition has been signed by Canadian players that can be found here.

The petition calls for a reduction in lotto max fees, and the return of all previous games offered during the time of Lotto Super 7.

Please sign the petition to get our favorite games back!

A $50M unclaimed Lotto Max ticket is about to expire. No one has cashed in the ticket, which was purchased at a Cambridge store nearly a year ago. If not turned in, it will be the largest unclaimed prize in Canadian history.

The Ontario Lottery and Gaming Commission is initiating a publicity campaign in an effort to find the winner. OLG has further information regarding the claiming of prizes on their website at www.olg.ca. 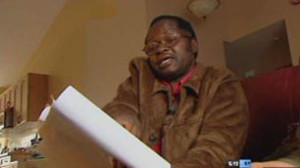 In his defence, Ndabene claims he purchases hundreds of tickets every month and his winnings are legitimate. “I won rightfully,” stated the native of Mozambique. Yet, Ndabene and a few other lottery winners who have won large amounts of money, numerous times, all share a similar story. They all have close relationships to retailers.

Ndabene has won 5 Jackpots after buying hundreds of lottery tickets every month. Here is a list of his winnings in chronological order:

Evidently, the odds of winning this many jackpots consecutively are slim to none.Some ways he may have won are:

With no evidence of Ndabene buying hundreds of thousands of tickets each week, and Ndabene stating he only purchases a few hundred tickets per week, it seems he either got really lucky or he found a way to beat the system.

Ndabene’s relationship with the Airdrie retailer is unclear. However, we were able to determine six facts:

Unfortunately, there is no smoking gun.

The case of Ann Lepine and Barkley Heron also raises red flags. In this particular case, the former Fort Smith NT couple shared an $11,000,000 Million Lotto 649 ticket, purchased in 2007. Four years later and after being separated from Heron, Lepine won again, only this time for $7,700,000.

Ways the Lottery Can Be Cheated

To identify ways to cheat the lottery, it is important to first understand its mechanics. From there, you may be able to identify possible loopholes.

For a chance to win $15 million, odds to matching seven out of seven numbers are 1 in 28.5 million.

In the end, it appears luck and good ol’ odds must have prevailed once again!